My father has had the same morning routine since I can remember. I don’t actually know what it looks like–his door was always (mostly) closed in the mornings–but I recognize the sounds and smells: the radio clicking on, the shower knob turning, the creaky medicine cabinet opening and shutting, the Old Spice aroma filling the hallway at the top of the stairs. I have this theory that if my childhood home disappeared into thin air, my father would still maintain his 5:30 a.m. ritual, sleepily walking the diagonal line to where his bathroom sink used to be.

My mother had her own predictables. I still can’t walk into a TJ Maxx without aching for her presence. Those stores somehow smell the same nationwide, and there’s something about discounted merchandise that takes me back to long hours spent attending my mother’s favorite version of therapy. Still, to this day, she’ll walk into a store on a bad day, fill one of those red carts to the brim, and then simply leave it there and walk out, refreshed.

As a kid, ritual was everywhere. Nature walks were for weekend mornings after breakfast. Every dinner was had at the dining room table with candles and cloth napkins. There were always back scratches and Grimm’s fairytales before bed, croissants on Christmas morning, mind-numbing readings of the Declaration of Independence on the Fourth of July.

Even in the most routine-less of times in my life, I have managed to find things to rely upon. Weekend mornings in college were for recaps of the night before, hair amess, p.j. pants inside out (or missing altogether), chipped bowls of off-brand cereal in our laps. Thursday nights were for The Office; Wednesdays for America’s Next Top Model. I could rely on the fact that my college boyfriend and I would order big salads from Gia Pronto and stay in bed, the one place where our relationship made sense, all Sunday long. In a way, the ups and downs of that relationship became almost routine. He wanted me the way furtive smokers want cigarettes: suddenly, occasionally, usually with alcohol, and more often on balconies and behind closed doors than in public.

Doing the same thing night after night or morning after morning also served as a way for me to cope with being in a new place. Law school was, to put it bluntly, AWFUL, so I hid behind identical evenings on my boyfriend’s couch, long dog walks with my best girlfriend at Lake Ella, and predictable Saturdays at Doak Campbell Stadium. When I moved back to Cincinnati, I insisted on Wednesday night dinners with my dad, and I stuck to it. Every single Wednesday. On Sundays in the fall, Marc would watch all the football in the world from his living room, and I would take hard, hard naps on his lap. Every Sunday.

And so it bewilders me that since we’ve moved to Austin, Marc and I have hardly lived a predictable life. Until very recently, really, I didn’t think we needed one.

Last weekend, I threw a fit, as we all are prone to do from time to time, about the general state of cleanliness in our home. I placed blame, I made myself a housecleaning martyr, the whole nine. After some much needed sleep, I came to terms with the fact that structure, something I’ve been showered with my entire life, might just be the way Marc and I crush this whole marriage thing.

Now, we have roles. We have a system. It’s brand new, and yet to be truly tested, but just its existence has made the day-to-day of living with another human peaceful and pleasant. That, and the fact that Marc and I have found another ritual, one far more enjoyable than our adult version of the chore wheel: the Spanish G&T.

When it comes to me and alcohol, it’s complicated. Seeing someone you love and respect hammered one too many times puts a bad taste in your mouth; a really, really nice Manhattan can suddenly make that bad taste go away. My stomach battles over the last year have left me wary of most alcoholic potions, but trial and error has afforded me a few non-offensive options. The best of which? Gin.

In Spain, they call it a gintonic. During a wedding last summer in the hills of Cuzcurrita, a tiny town in the hills of the Rioja region, we sipped the things from crystal glasses under the shadow of a centuries-old castle, snagging nibbles of fresh sliced jamon iberico, tiny bowls of ceviche, and quail egg toasts from the impeccably dressed catering staff. It was decadent, borderline ridiculous, and so, so amazing. My gintonic was simple–a fresh squeeze of lemon peel and a few pink peppercorns–but something about it just glows in my memory. 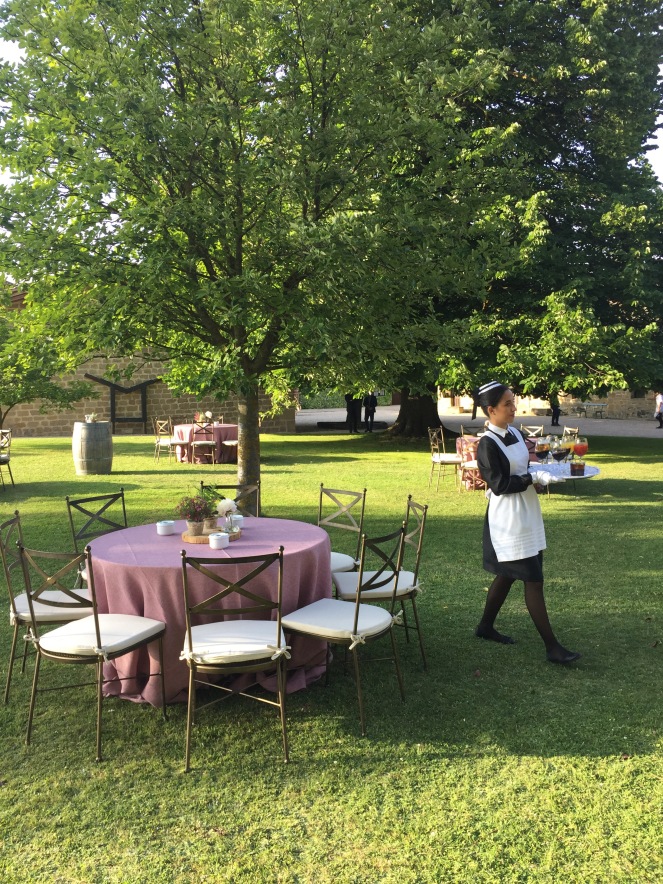 Here in Austin, the memory was revived one particular date night with an impromptu drink at Vox Table on South Lamar. The menu boasted their own version of the Spanish G&T, complete with a rare Spanish orange cognac, olives, rosemary and orange. It was one of those drinks that makes you empathize with alcoholism, one of those concoctions that you savor with every sip, the kind that makes you drunk in the way a truly delicious meal makes you full.

And so, with a mess of fresh rosemary growing in front of our house and a lone orange in our fridge, I decided to try my hand at the thing. A little research told me that what truly makes a Spanish G&T is hardly specific ingredients, but the achievement of an almost overpowering aroma with every sip. They should be imbibed from large, globe shaped glasses, ones that allow the herbal, aromatic additions to swirl and combine and then travel freely to your nose as you raise the glass.

I used a tonic syrup I discovered in my dad’s liquor cabinet, one that allows you to control the level of sweetness in your drink, a splash of olive juice, a squeeze of orange peel, and a sprig of rosemary. The gin itself–a local, floral creation with hints of lavender and lemon that just GETS me–rounded out what is now my (and Marc’s) favorite way to spend the early evening hours at home.

Predictability is such an unsexy word. It is almost as unpleasant sounding as “work” or “Monday.” But life doesn’t get to be sexy all the time, and I can’t help but think that most routines, traditions and rituals were once, like everything else in life, quite new. The things we choose to stick with–the ones we add to our repertoire–often deserve it, whether it’s the way we start our day, the drink that closes out our week, or the person with whom we choose to enjoy it all.