I love takeout. Some of my favorite childhood memories include my mom, my sisters and a plastic bag of MSG-drenched goodies. I love takeout of all kinds, but Asian food has a special place in my heart. There’s something about it that makes it taste so much better when it comes out of a white plastic bag with THANKYOU written three times on the front.

Not everything tastes great in takeout form, however. Takeout pancakes and waffles are never as good as they are on the plate. And soup is always a wild card. I once asked for takeout Pho from my favorite Vietnamese spot in Cincinnati and the woman behind the counter could only shake her head at me. “It’s just not as good,” she said. And it really wasn’t.

So when I learned that Michi Ramen, the ramen spot with food truck roots (oh, Austin, how you love and cherish your food trucks), had opened up a location in my ‘hood for takeout and delivery only, I was skeptical. Ramen takeout? How does that work, exactly?

The great thing about Michi is that they have takeout ramen down to a science. When I called to order my Tuesday night feast, my skepticism seeping through the phone, the extremely friendly and helpful Michi employee gave me a short and simple explanation of how it all works. In the photos below, I will attempt to do the same thing for y’all.

It arrived in four parts: the ramen and its toppings, the lime and cilantro, the toasted lemongrass and the steaming hot broth.

The broth had me coughing before I even tasted it. That’s how you know the spice is real.

Your first step is to pour the broth over the ingredients. You then top the concoction with the toasted lemongrass, a squeeze of lime and the cilantro.

THEN: the genuis part. You let it sit. You snap the convenient bowl cover they provided for you (free tupperware woo hoo!) over the mixture and let the flavors meld for a couple of minutes. The anticipation is half the fun. 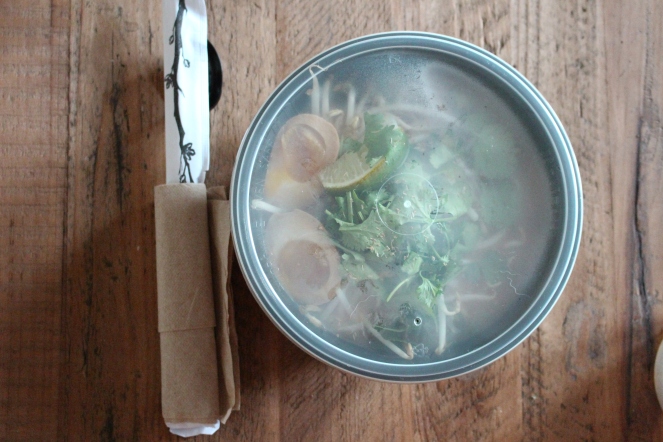 Just as the last cloud of condensation forms on the top of the lid, you take the lid off and mix everything together. What you find yourself with is this:

And it’s so good it hurts.

The lemongrass broth is everything. Michi Ramen offers 3 options for their broth: light, regular and stout. The more “stout” the broth, the more “stuff” (a.k.a. fat) they leave in the broth. I opted for regular and it was exploding with flavor. The lemongrass was perfectly tart; the mere thought of that pork flavor is making me salivate as I type this. I know I can trust this place because I could eat that broth alone (think illness in cold(er) weather) and be completely and totally satisfied.

And then there’s the STUFF. The pork is tender, salty, perfect. The bean sprouts add crunch; the cilantro and lime add incredible depth to the already flavorful broth. And the EGG! Oh, lawd. This perfectly soft boiled egg is marinated in soy sauce–so simple, yet so complex. It adds a surprising and delicious bite to your bowl.

Finally, the noodles. I enjoyed a delicious bowl of ramen here in Austin at Ramen Tatsu-Ya not long ago (hard to beat that giant slice of pork belly they throw in there) and my ONE complaint was the noodles. Michi’s are more my speed; they are, to put it simply, just like the ones your college roommate made for you, only all grown up and so, so much better.

To put it simply, Michi nailed my Tuesday night. For around 11 bucks including tip, I’ll walk my ass over there any day of the week.

Daily Discussions of craft and the writing life